Board Member, ERMA Certification Board

Mr Bongartz was an Executive Director in the Markets Division of ABN AMRO Bank, based in Amsterdam. He has been with the Bank since 1985 but took early retirement in September 2011 and relocate to Southeast Asia to continue market / credit risk, ALM and treasury consultancy work for banks in Asia and the Middle East. At ABN AMRO, he is now finishing his 26 year career working on a project in the Bank’s Financial Markets / Treasury Division related to counterparty credit risk exposure measurement, with focus on CVA (credit valuation adjustment) pricing and management. He has owned and operated his own consultancy firm – Markets & Risk Solutions – since 2008 which has been working with banks in Asia and the Middle East.

From 2005 – 2010, he was part of the management team of the Bank’s Risk Advisory Services global business, providing EMEA and Asian-based financial institution clients with assistance in the areas of Market Risk, ALM, Financial Products and Treasury consultancy. From 2004 through 2005, Douglas worked in Market Risk Management where he established and managed a small team responsible for reviewing and approving complex structured product and unusual derivatives transactions.

From 1985 – 2004, Douglas helped establish and develop ABN AMRO’s Financial Markets activities in derivatives and held a number of senior trading / distribution / product development positions. He was Global Head of Currency Derivatives at ABN AMRO from 1999 – 2003, during which time he substantially increased the Bank’s global FX derivatives business both in terms of client coverage, geographical trading scope and the range of currencies and products traded and provided clients. He gained recognition for ABN AMRO’s FX derivatives business by winning Risk Magazine’s “Currency Derivatives House of the Year” award for 2003. Before taking over the management of currency derivatives, he played a leading role from 1985 through 2003 in building the Bank’s overall global derivatives product trading capability in the areas of interest rate derivatives, exotic options and structured products, serving as Global Head of Rates Derivatives and Structured Products.

Prior to joining ABN AMRO, he worked for 10 years with Continental Illinois National Bank and Brown Brothers Harriman & Co where he had various assignments in commercial and international lending, client financial and F/X advisory, securities issuance and derivatives structuring and trading. During this period he worked primarily in New York and London.

Douglas served on the ISDA (‘International Swaps & Derivatives Association’) Board of Directors from March 1994 to April 2008, and was Board Secretary of the Association from 1998 – 2004. He is a graduate of the University of Chicago holding BA and MBA degrees, and is FRM certified by GARP (‘Global Association of Risk Professionals’). He is a Dutch national currently living and working in The Netherlands, but has spent most of his time during the past six years working directly onsite with banking clients in Asia and the Middle East.

The 7th Edition of RiskView Magazine is Out!

Download now to get insights around Talent Risk Management. 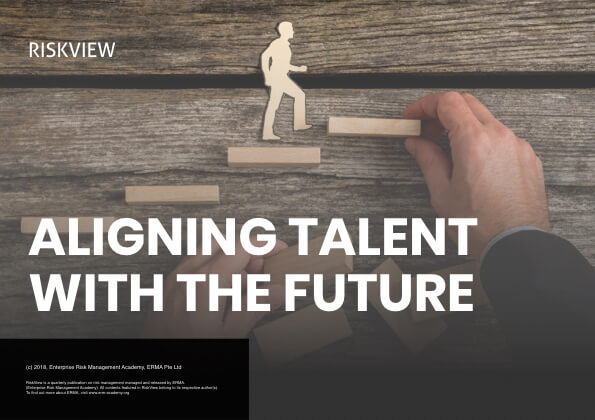